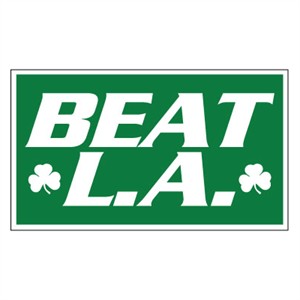 Can you believe that the NBA season’s finally about to kick off? On top of that, there has already been a ridiculous amount of player moves made that will inevitably shift the power structure in the league, most notably in the West. Before I jump into the moves themselves, lemme resoundingly state: Lakers Suck.

Now that that’s outta the way, just know that the Celtics might be running on fumes a little this year, as KG, Pierce, and Ray are all getting up there in age, but with the re-signing of Jeff Green, the signings of JaJuan Johnson and E’Twaun Moore, our bench is ready to step up. Filling in the gaps are Chris Wilcox at 4/5, Sasha Pavlovic on the perimeter, and second year high potential combo guard Avery Bradley. Granted, we lost Big Baby, who is cancelled out by the man he was traded for in Brandon Bass – has a high motor, tough defender with a solid face-up game. Add in newcomers Greg Stiemsma (D-League Defender of the Year), Keyon Dooling, Sleepy Face Marquis Daniels, and Jermaine O’Neal’s lackluster declining skillset, and you have the make-up of what could be an interesting season. But enough about the Green.

The struggle for Western Conference supremacy is compounded by the fact that the Lakers got ridda Lamar Odom, aka Mr. Kardashian, aka Khloe’s husband. They keep Kobe, Gasol and Bynum – but what they lost out on is a glue guy like Odom. They tried their hand in bringing in CP3, but their in-town rival Clippers landed him. Here’s where it’ll get interesting – picture CP3 running the break and throwing lobs to Blake Griffin…over and over again. Granted, the Clippers lost some valuable pieces with Eric Gordon and Al-Farouq Aminu, but they gained a 20-point, 10-assist, 2-steal per game point guard. That’s gonna be the game changer. They have a lotta talent in their backcourt at the moment and, in a shortened season with more back-to-backs, their youth and athleticism is gonna cause serious issues for Western Conference opponents.

Still can’t rule out the OKC Thunder, with superstar Kevin Durant and the point that the Celtics made a run at in Russell Westbrook. Durant’s good for close to 30 a night as a staple, with the potential to go higher into the 40s. He was out all summer, playing solid competition at the Rucker and in city pro leagues. He’s simply dominant. Westbrook’s playing outta his mind at the moment too; slashing to the bucket for dunks or uncontested lay-ups, but was a borderline liability whenever he seemed to channel his inner J.R. Smith and throw up some garbage type shots on occasion.

Without going to much deeper into the situation in the West, I can go ahead and say with certainty that the Lakers won’t be a 1 or 2 seed come the playoffs this year. OKC and the Clippers are way too talented, too young, too athletic to be dealt with by the Lakers. Western Conference Finals this year should feature those two teams, with the LameShow getting knocked out in the second round.  If all goes accordingly, it could be the Celtics in the Finals with one of those two WC powerhouses…if our Big 3 + Rondo can leg it out this year. The East is deep, but the talent in the West is crazy.