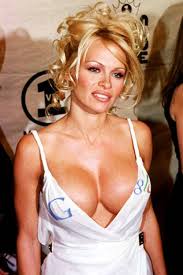 It’s been a topic of debate with me for a long time now; What’s nicer – Real or fake breasts?

Now, I say “breasts” as the PC term, when all I really wanna say is “tits”. Ehh, testosterone’s getting the best of me this morning. Personally, I’ve been with girls on both ends of the spectrum. Big, medium, small. Real, fake. Pretty, ehh. But I really can’t rock with fake tits. As nice as they can be to look at, there’s something in the unnatural feel and movement of em that just doesn’t do it for me. Shit, if I wanted to feel something rock hard with a nipple, I’d find a rock…with a nipple on it. There’s something uncomfortable about squeezing until you burst a blood vessel in your eye, just to feel a semblance of a real tit around the saline bag.

I’ve long said, “If your tits are plastic, you won’t get a second look from me.” I wasn’t lying – if I can hint that you’re packing airbags in there, there won’t be a crash for us together. Then again, I can see the ladies’ side of it – some aren’t fully comfortable or confident because of the feeling of inadequacy. There’s always been a HUGE confidence boost in girls I know that have the procedure done – they rock skimpier bikinis, lower cut shirts, tank tops exponentially more often. On top of that, they flaunt their sexuality more. All of which is a plus for guys…myself excluded.

I feel like, regardless of body modifications, there’s a certain level of pride that should be internally felt by people. Granted, some weren’t exactly dealt the best hand in life from a looks/personality perspective, but fake tits won’t cure your shitty attitude or Mr. Potato Head-type face. You know, the eye off center or ear crooked, lips upside-down, etc. There are certain things that can fix that, but of course, that’s more money outta pocket.

It’s an understood thing that some medical conditions can call for augmentation surgery – mastectomies, where a portion or the entire breast is removed due to disease or infection. That’s just about the only thing I’d support. Obviously, this is only my thought on the topic itself and I’m sure someone will anonymously run up on me with some “Fuck you! It’s not your body!” comment, which I will readily reply with, “Yes, you’re right. I wouldn’t pump a bag of saline into any area of my body. Period.” Chalk up one point for me.

At the end of the day, if you’re gonna go the implant route, do so at your own cost (and sacrifice). And by the way, please go ahead and get something that’s proportionate to your body. If you’re gonna go the fake route, isn’t it more appealing if not everyone can spot those two blimp-sized titties from a mile away, only to look in your direction like they’re at a circus? Ladies, you take pride in your appearance, right? So why go overboard and get some shit that won’t allow you to wear that small or medium tee shirt you love anymore? Now you’re wearing an XL and it looks like a tent slung over camel humps with ridiculous amounts of fabric left over. It’s just…an odd look.

Hey, it’s your body, so do as you wish. If you’re hoping to turn a ton of heads, I don’t doubt for a second that you will. But I’m keeping my eyes to myself if I even suspect plastic play things. Real shit.