We all know it’s that time of year – costume party season. The ladies dress up (but mostly undress) and dudes tryta be clever beyond their capacity. Halloween is the one time of year where fuckery is the absolute standard. Plenty of eye candy, but some people end up looking like conjunctivitis. Take a look at the ridiculous that Halloween inspires; from the sexy costumes stretched to capacity, all the way to the downright inappropriate and distasteful. Get your popcorn ready:

Ghost of QBs Past: For those that remember NFL QB Steve McNair, they remember an All-Pro QB in the 90s and early 2000s, who was gunned down by his mistress who was mad McNair had another side piece aside from her. Dude above is paying a tastelessly accurate portrayal that will live in infamy for years to come. 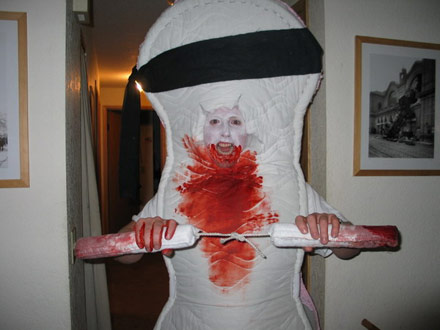 Once a month, never again: One of the most horrifying, cringe-inducing, beautiful, but better ignored, wonders of the female body is that monthly visit from the red dot mafia. Some things are better left unsaid, some better left unnoticed. Case in point above. It’s ironic that a douche is playing a tampon tho…

Living Vicariously: Ratchet. Now that I’ve said that, I’ll say that it’s not uncommon for dads to push kids to achieve the shit that they couldn’t as kids – sports, academics, college, the hot chick up the street. Something tells me mom dressed him with the vision of “if this kid ended up in a rubber…” Otherwise, that’s a huge rubber to not be a Magnum.

Dead Right: Can’t front, this is hilarious. Moving on.

Faces of Ignorance: Yeah, so umm, blackface is just a bad idea. It’s corny, it’s kinda ignorant…really ignorant, and dressing like Lil Wayne, Drake, 2 Chainz, Kanye, or a homeless dude spells disaster when you cross dudes who can’t change their skin color. Face paint and blood look funky together too.

Going Ham: Probably not the intended effect this costume gave off, but why you dressing as food, you tubesteak? See what I did there?

Makes the World Go ‘Round: Guess we’re moving on from ham to roast beef, huh? Fellas, if this is the closest you’ve been to some sex lately…it shows. Look at that? Someone needs to squat in a bucket of vinegar. Like a black hole in there.

Jerry Sandusky: For the love of Christ and having the slightest bit of morality, please avoid dressing as an old man that sodomized and ruined the lives of numerous young boys. If you don’t, I’ll say a prayer that someone turns the tables on old Jerry. Or anyone dressed as a prisoner gives you the old shower service.

Spooky, weird, and crazy shit happens on Halloween. Thousands of drinks, illicit drugs, parties, people dressed like they were fresh outta fucks, and inevitably some hurt feelings over people’s attire. Notice I left out the larger folks stretching threads to the point of exposing more land that they’re already taking up? Yeah, and don’t wear all white, big people – you look like clouds. If you see some fuckery, make sure to get a picture and hit me up next week.