I useta sit back and laugh.

Damn, people really have the time, energy, creativity, and loneliness to assume the identity of someone else? People have the audacity and lack of self-awareness to carefully gather pictures of another person and construct their own personality that be that person? I’m no virgin to identity fraud/theft, as referenced here, but just fucking whyyy? MTV put a fucking spotlight on the perils of online dating/cavorting with people that you THINK are who they claim to be. Well, Nev, chances are you’re gonna be looking for a dude with green eyes, a beard, and a penchant for smoking. I’ll be watching…

Instagram – all pictures, all the time. MySpace was the OG in the virtual thirst game, but Instagram has launched unfettered, double tappable creepiness at the calloused fingertips of those who choose to participate in the fuckery. For me, this past week has been remarkable, in the sense that I proclaim on a day-to-day basis that I, in fact, ain’t shit. I’m unwavering in my resolve and I implore you to understand that. Some folks, however, ain’t getting it.

For business purposes, people can reach me on different apps if they choose. Email’s not always the easiest, so I (very rarely) use Instamessage or InstaDM for opportunities that might pick up on the fly. I got randomly contacted by someone up in frigid ass Canada, asking where I get clothes from. She then stated she Google Image searched one of my Instagram pictures to find my Facebook page (uh huh), which led her to a profile for a Chris Macguire, whose cover photo was a scrunchfaced and bespectacled chick. He also had an affiliation with the prestigious University of Manitoba. Canadian college co-ed Chris (alliteration over everything) had one real issue – he is I and apparently, I am him.

Thanks to the investigative Canadians that seemingly lurk my IG page, it was revealed to me that, alas, Chris wasn’t actually Chris at all. The chick in the cover photo – Chris’ love object – was actually a girl that followed me on Instagram and made a fake Facebook profile to comment on her own pictures. Umm, alright. Different strokes for different folks. And you wonder why I’m so jaded towards Canadians.

If you know/follow/creep me, you know I’m kind of an open book. I don’t hide my face, nor do I attempt to cover up my ongoing love affair with ganja. This will eventually become my undoing, but I’m self-destructive than a motherfucker and I can’t see that characteristic falling by the wayside in the near future. So, yet again, it was brought to my attention that my likeness was being used for the gain of others – this time on the same network where there’s no such thing as quiet lurking.  The audacity of someone using my face to be the avatar on a private page. On top of that, this kid left incisor marks all over my tag line too?

The Five One Zero? Bay Area Biter? Shoutout to my Oakland/San Francisco people tho. Smoke good, eat good, live good? Kush Lords? My head is spinning slowly thru the neverending fuckery that comes my way. Curiosity killed the cat, so you know all nine lives are gonna be spent looking into this shit, as he blocked me as soon as I requested to follow him. The equivalent of Jordan sending Fubu some cease and desist letters after biting the 3s – 6s. Stop the madness. I got good people in all places, so the next step was to employ their wares to take a long look into Kush Lord Jay. What came next was no real surprise, but come on, son: 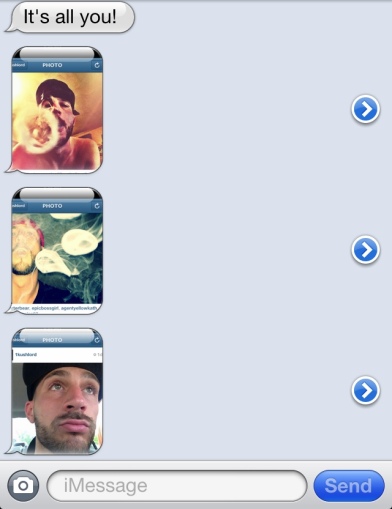 Pictures, freshly squeezed off my page, leaked onto a private profile in the hopes that discovery would never happen. I’ve had my bank account drained by some tech savvy cocksucker in the Meth Capital of the US (Kentucky, slow pokes) – what leads you to believe I’m not gonna recognize a mug I’ve seen in reflective surfaces all over Massachusetts? If nothing else, people know my face. Might not have the slightest clue as to who I am, what I do, where I’m at, but they know the grill.

Some say “be flattered”, others say “creepy”. I’m erring on the side of the latter. Imitation is the sincerest form of flattery, they say. Imitation is not jacking – imitating is trying to be LIKE someone. It’s not trying to BE someone. Weirdos. You’re all on FRAUD STATUS until further notice. We’re watching.

One thought on “The Fuckery: Catfish Life?”