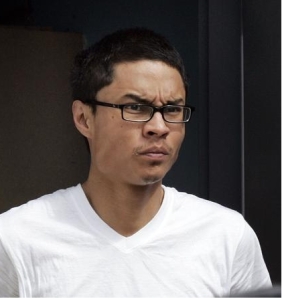 For those Pembrokians that are aware of the lone shooting we’ve had in the past decade or so, the name Dorian Membrano may sound familiar. For those that don’t remember the story, lemme put you up on the news:

Membrano, of gorgeous (read: gross) Bridgeport, CT, was promised between $7,000 – 10,000 from Anthony DeJesus in a murder-for-hire plot, to kill DeJesus’ ex-girlfriend and Pembroke resident Marybeth Banks, who was a dancer of sorts. Did she strip or do ballet, you ask? I have no clue, but the fact that Membrano dumped approximately 10 shots into THE DRIVER SIDE WINDOW of her car while it was parked in her driveway after 2 AM allows me to assume that A) she probably takes off her clothes for money (which I don’t have an issue with) and B) Membrano is a horrific shooter. Ten shots, point blank, and the target doesn’t die? Helen Keller’s laughing at how you can’t cock and aim (pause).

DeJoseph, who’s currently incarcerated for 5 years on a 14-year sentence for kicking and breaking the ribs of his ex (Banks), is being investigated by the Feds for this particular murder-for-hire plot.

Oh yeah, the shooter Membrano pleaded guilty back in September and his sentencing was pushed back until June…which was the reason I wrote this. Not to ponder how the fuck you can miss a kill shot from 5 feet away when given almost a dozen shots. Guns don’t kill innocent people – people with guns who can’t aim kill innocent people. Luckily, in this instance, a dude from Bridgeport with a gun, 10 bullets, and a target couldn’t kill an innocent person. For that, I’m glad.